The All Star Circuit of Champions Sprint Series kicked off a mid-May weekend at I-96 Speedway in Lake Odessa MI on Friday night May 14th. A strong field of 32 cars would do battle for the Mace Thomas Classic boosted winner’s check of $8500. The night would start with Indiana native Justin Peck and the Buch Motorsports team taking the fast qualifier award with a time of 13.086 seconds. Notable Allstar drivers Buddy Kofoid and Paul McMahan would each win their respective heat races.

With many non-wing sprint and midget wins to his credit, series rookie of the year contender Tyler Courtney and the Clausen/Marshall team would find themselves starting in the six spot for the 30 lap feature and looking for his first series victory. After a mid-race caution he would find himself in the second position with Ian Madsen in the lead. The ensuing restart gave Courtney the opportunity to squeeze the top side and pass Madsen for the lead. Surviving three more cautions Tyler would take the checkers with a 2.5 second lead and win his first feature with the series. “This makes it all worth it, we’ve been close but finally got it”, said an elated Courtney in victory lane. Fellow Allstar drivers Peck, McMahan and Rico Abreu would round out the top five.

Saturday night the series would make their way to the Dirt Oval at Route 66 in Joliet, Illinois for a showdown with the IRA Sprint Series based in Wisconsin. With a field of 28 cars signed in, reigning ten time IRA Sprint Series Champion and current All Star Series competitor Bill Balog would take the fast qualifier award with a time of 13.024. Notable Allstar drivers Rico Abreu and Kyle Reinhardt would win their respective heat races.

Another series rookie of the year contender would find himself in the same position as previous night’s winner Tyler Courtney and in a position to win his first career feature win with the All Star series. Kyle Reinhardt and the Capital Renegade team would try to capitalize on their heat race win earlier in the night. Starting on the pole Reinhardt would control all 25 laps of the feature but not without Tyler giving him a battle each lap. A late-race caution would help seal the deal allowing a clean track to finish out the race collecting his first series win and the $8000 payday. “This is pretty unreal, I just can’t thank all of the people who stuck behind me enough” stated an exuberant Reinhardt. Courtney would follow up his Friday night win with a strong second place and fellow Allstar driver Bill Balog taking the fourth spot. 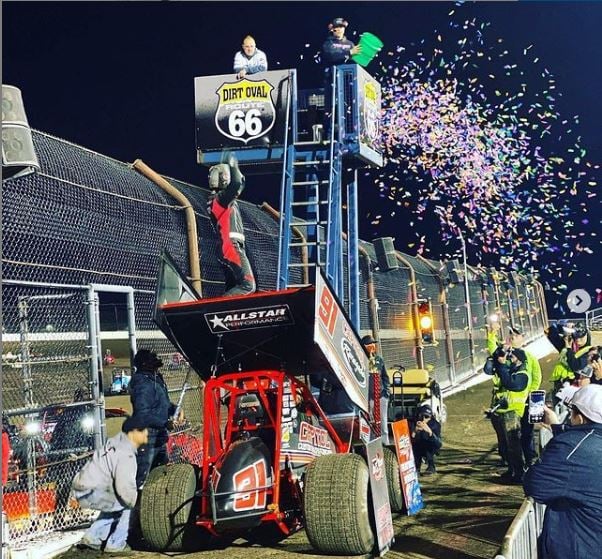