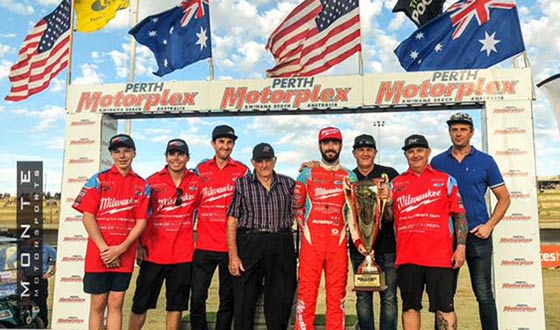 One night after winning the opening feature of the Grand Final weekend, reigning World Series Sprintcars Champion James McFadden clinched his fourth series crown by claiming Revolution Racegear Quicktime in qualifying for the second night of racing at the Perth Motorplex in Western Australia. With a lap of 13.867, McFadden edged out Australian Sprintcar Champion Kerry Madsen to claim the maximum points and create and unassailable championship lead to clinch the title. “It’s great to win this series again. I have just got to thank the Monte Motorsport guys. It’s a long season doing this, we have had our ups and downs but to get the win last night was unreal”. McFadden went on to start from the second row of the A Main, but came to grief in lap 14 while pursuing Kerry Madsen for the lead, when South Australian Lisa Walker rode the wall in turn one leaving the leading pair nowhere to go. Both Madsen and McFadden retired from the race, creating the opportunity for Jason Kendrick to claim his first ever WSS round win.